An organic garden should be welcome to most benevolent flora and fauna as long as it doesn’t interfere with your crops. Moles are an example of animals that can be a blessing to fallow lots but a nuisance to established gardens.

Moles are small subterranean mammals that mostly feed on insects. They are notorious for their underground tunneling. Their tunnels can help turn over soil on unused land making the soil structure better.

However, if they attack your garden, the tunnels they dig can:

How Do You Know If You Have Moles in the Garden?

Moles prefer rich soils with a lot of organic matter that forms the perfect habitat for the insects and grubs they prey on. There are two main ways to establish whether you have a mole problem:

This is the easiest way to spot a mole problem. The tunnels they dig when foraging for grubs, pests or earthworms are hard to miss.

Scan your lawn for raised volcano like mounds of soil (molehills). These are openings to the subterranean tunnels. The tunnels could also form ridges when dug close to the surface but this is rare as moles prefer deeper tunnels that are up to ten inches deep.

ProTip: Moles mostly dig closer to the surface in spring, early summer and in the fall. They spend the rest of the year deeper in the ground

Catching the real mole might be a bit hard but it is the surest way to prove that you have a mole problem. The most notable features on a mole are:

A typical mole is around 7 inches long and weighs in at about 4.5 ounces.

How to Deal With the Moles

The ideal organic farmer will let moles be especially if they are not harming any crops in the garden. Normally, the moles will move on once they deplete their food source (worms, grubs and insects). They will leave you with turned over soil that is possibly healthier than before.

You can flatten the mounds every now and then to prompt them to move on faster or just wait until the activity subsides before raking and claiming your garden back.

However, if they are in an active garden and are proving too much for your crops, you can use one of the following techniques to either trap or persuade them to move on sooner than later.

Unlike rodents like squirrels and rats, moles won’t actively destroy your plants as they are not herbivores. Any damage (at least to them) is collateral.

1. Using Mole Repellents to Dissuade Them

The first, and perhaps simplest, step is throwing in some mole repellents to prompt the subterranean mammals to move out on their own.

We will start with natural ways to deter moles buy using things that they hate as this is the most natural and ecofriendly solution to the problem.

Planting a couple of right plants in and around your garden is a great way to deter moles and other rodents, pests, or farm animals like chicken and rabbits. Go for plants like:

Castor beans contain castor oil that is a tested and proven mole deterrent. However, it is poisonous and should be used with caution especially if you have children and pets. Mole Plant is also poisonous.

3. Have a Cat or Dog ‘Patrol’ Your Garden

Most rodents won’t go anywhere near a garden that has a heavy cat or dog presence. Cats and dogs love chasing after small mammals, and the mammals don’t like putting their life at risk if they can avoid it.

While a cat or dog might not actively hunt moles, they will make them uncomfortable forcing them to move on. Cats are a proven effective mole deterrent but dogs can still do the trick.

Ultrasonic noise makes moles uncomfortable and can prompt them to move away from your garden even if there are still some juicy grubs around. Purpose made ultrasonic stakes will generate noise you can’t here while simple toys like spinning daisies will produce audible noise that is equally annoying.

Castor oil is the most popular ingredient in commercial mole repellents. You can make your own mix at home instead of going for the slightly expensive commercial blend.

Castor oil is poisonous. Ensure you clean your equipment well and that your livestock or family doesn’t consume crop from freshly sprayed garden patches.

If you go commercial, you can choose between granular and liquid mole repellent. Chances are they are all castor oil based. They don’t poison the moles if used in recommended proportions but just make the area unattractive by releasing unpleasant odors and making the soil, insects or grubs taste terrible.

Spread the granules over the soil using your hands or a drop spreader.  Some brands to look for include:

The liquid repellent can be 100% castor oil or a blend with other compounds goes  into a spray can or a water tank and fed by attacking a hose-end to the ready to use can. Some brands in the market include:

If your mole deterrents aren’t doing the job right, you will have to resolve to trapping. Most mole traps kill the mole. If you are looking for a more humane solution, you might have to contact a wild life removal experts. After all, you might not have the means to relocate the mole after trapping it.

ProTip: Since most mole traps are not humane and are basically extermination, we advocate for repellent or hiring a professional to relocate the moles. In addition to this, trapping moles might be illegal in some states like Washington while other states will demand that you get a permit to do it legally

If you want to do it on your own, you can:

Mole bait also uses the same kill approach like most of the traps. The bait resembles grubs and worms moles feed on. The bait kills the mole within two days and can also kill any other animal that consumes it.

ProTip: Killing moles by poisoning them is inhumane and illegal in a couple of states. Do your own research before resorting to this approach.

Do Moles Eventually Go Away?

Yes. Moles will move on once they exhaust the food supply in your garden. If you can afford to relocate your patch or simply ignore them, this would be a wiser approach that using traps or bait. If it is impossible to ignore them, use repellents to encourage them to move on sooner than later.

At the end of the day, you have to decide whether a couple of molehills in your garden is worth a full-blown war or not. To most people who have sizeable pieces of land, it rarely is worth the effort. Ignore the problem and let the moles aerate your garden – and perhaps get rid of harmful pests in the process.

link to Why Does My Chicken Coop Smell So Bad?

Continue Reading
link to How to Can Food without a Canner

People have been canning food for a long time, even before canning tools were invented. This means that the practice of canning without a canner has existed for a long time. In the past years, no... 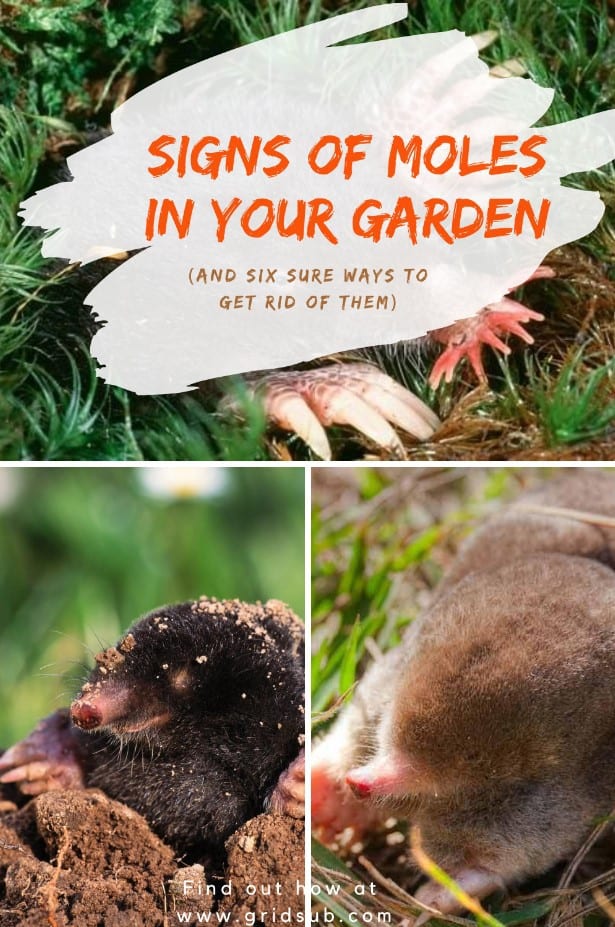